Critics have lambasted us, the duty to warn shrinks, for making a clinical assessment of Trump, or worse according to some of them making a diagnosis without interviewing him in person. We just had another chance to see the unfiltered Donald Trump when he addressed a friendly crowd in Ohio on Thursday. At these rallies, we see someone we'd never see if he sat down with us knowing we would be determining if he was psychiatrically fit to be president.
.
We have a president whose narcissistic need is so overwhelming he needs to feed it by regularly by ranting against his enemies at rallies. The need becomes greater and greater the more he is under stress. That wouldn't be so dangerous except that he seems to make up policy on the fly.
.
For example, he offered up a policy towards S. Korea which has experts confounded. He seems to have confused South Korea with North Korea. Why would pausing a trade deal reached with our close ally and trading partner, democratic South Korea, be a bargaining chip in talks with Kim Jung Un?

This is from Politico: But the president also broke significant new ground, threatening to put a pause on the newly reached trade deal with South Korea to use as a bargaining chip in talks with North Korean leader Kim Jong Un.
“I may hold it up until after a deal is made with North Korea,” Trump floated Thursday. His administration recently unveiled the agreement, struck in principle by U.S. and South Korean negotiators earlier this month.

He also offered a policy which would result in the Kurds being slaughtered by the Putin backed Syrian troops to the south and the Turks to the north after working together successfully to decimate ISIS. The Kurdish-American alliance was hugely successful and based on trust. If you saw Richard Engel on MSNBC last night you'd know how immoral the decision to abandon them would be, and how it seems to be driven by Trump not wanting to stand up to Putin who is supporting Assad.

POLITICO: Trump also detoured for an extended stretch into military efforts in Syria, forecasting that he would pull U.S. troops out of the region in the near future. “We’re knocking the hell out of ISIS. We’ll be coming out of Syria, like, very soon,” he said.

Nuclear annihilation would at least save us from more of this.


Today Putin launched another aptly named Satan 2 (no doubt better than Satan 1). This led me to wonder if nuclear annihilation might be a merciful end to the insanity, and anxious daily grind of the uncertainty, of a world run by Trump and Putin and a cast of characters Lewis Carroll couldn’t have imagined occurring in real life.
Not only do we have to hope that Melania will not get fed up, decide to save Barron and herself, and finally leave Daddy Donald. Why? Because the optics of this might precipitate a psychotic rage attack in the nuclear master-buttonator who suffers from brainus derangus (not in the DSM-5) ---


but we have also have to deal with headlines to stories like this Roger Stone: Sam Nunberg Is a ‘Lying Asshole’ and ‘Psycho’ ---


as we endeavor to ignore the fact that Roseanne Barr, an actress most of us think is irrelevant, seems to be even more clinically paranoid than Trump.

A Washinton Post investigation story that will probaby be covered on one or more of the MSNBC shows tonight:

Behind the chaos: Office that vets Trump appointees plagued by inexperience


EXCERPT: An obscure White House office responsible for recruiting and vetting thousands of political appointees has suffered from inexperience and a shortage of staff, hobbling the Trump administration’s efforts to place qualified people in key posts across government, documents and interviews show.
At the same time, two office leaders have spotty records themselves: a college dropout with arrests for drunken driving and bad checks and a Marine Corps reservist with arrests for assault, disorderly conduct, fleeing an officer and underage drinking.
The Presidential Personnel Office (PPO) is little known outside political circles. But it has far-reaching influence as a gateway for the appointed officials who carry out the president’s policies and run federal agencies.

Here's the most a Tweet about Hope Hicks which has gone viral, and made it into a HuffPost article: 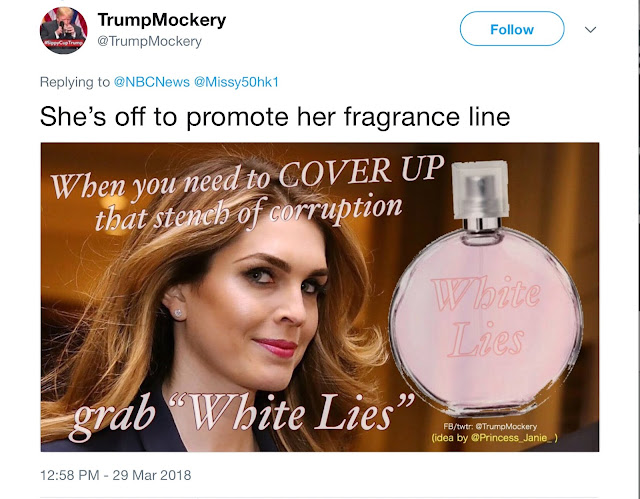 Advisory: The host of this website, Google Blogger, has been misbehaving and I have been having difficulty logging in so I can update it. If you find that it is out of date, i.e., not updated every morning, one of two things is possible.
Either I am working on fixing the problem or have given up and taken it as a sign I need to find something else to do in order to fritter away some my time early in the morning. If the later, I still intend to post frequently on Daily Kos where you can keep up with my original writing here.
I have tried to use halbrown.org to share a few articles and information I have culled from numerous other sources which I found interesting in my morning perusal of new news online and whatever is being covered on MSNBC. I often add excerpts so readers can decide if they want to read the entire article. Typically I review The New York Times and The Washington Post which require subscriptions if you want to read more than 10 articles a month.

I review the following:
The best and biggest original article and an aggregate liberal website is HUFFPOST.

RawStory is mostly an aggregate site but leans towards the gossipy.

Serious sites are Buzzfeed, Politico, Axios, Daily Beast, Salon,  Slate, The Hill, and Think Progress.
Daily Kos is an unusual website because it has a stable of staff writers and hundreds of regular non-staff writers who can publish anything there. Readers often comment on articles and one piece I wrote had about 500 comments. Typically there are far less. For example, these are my most recent articles with the number of comments in the first column.